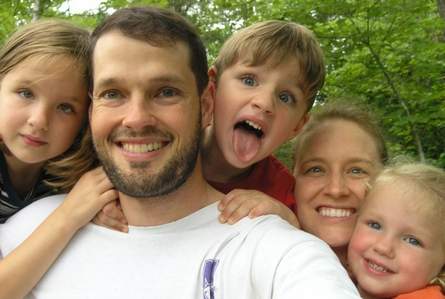 The other day I received the sad news that a high school class mate of mine had died from cancer at the age of 47. She had battled the disease for almost half of her life. Stephanie, was an only child and a single mother. Upon reflection of her life, I began to wonder what the journey was really like for her and her beautiful daughter.

That lead me to uncover a fact that there are over 700,000 children each year who deal with a parent that has life-threatening cancer. In this discovery, I came across a remarkable woman named Kristen Milligan, who walked a similar path to my friend, as a parent who was ill, and looking for ways to help her family.

In 2003, when Kristen was diagnosed with a rare terminal illness her children were only four, two and seven months.  She wanted to find a great book that helped explain her illness, when she couldn’t find it, she wrote her own.The book was called  A Train’s Rust, A Toy Maker’s Love, the story of a train family whose mother begins to rust, prompting questions of the toy maker about what will happen next. Kristen and her husband Deric, then expanded their mission to help other families dealing with serious illness and in May 2007 began the non-profit Inheritance of Hope.

Their mission was to improve the well-being in the lives of children and families, dealing with a parent diagnosed with a life threatening illness.  They achieved that goal by providing books, family retreats and support that was spiritual, emotional and financial. The Milligans believed that the more the family is helped, the more it helps the ill parent.

Kristen endured her disease for nearly ten years, including six surgeries, twenty-two months of chemotherapy, two rounds of radiation, and two more books. She died on October 26, 2012 and her legacy of hope lives on in every life she continues to touch.

Copyright © 2013 Charity Matters. This article may not be reproduced without explicit written permission; if you are not reading this in your newsreader, the site you are viewing is illegally infringing our copyright. We would be grateful if you contact us.